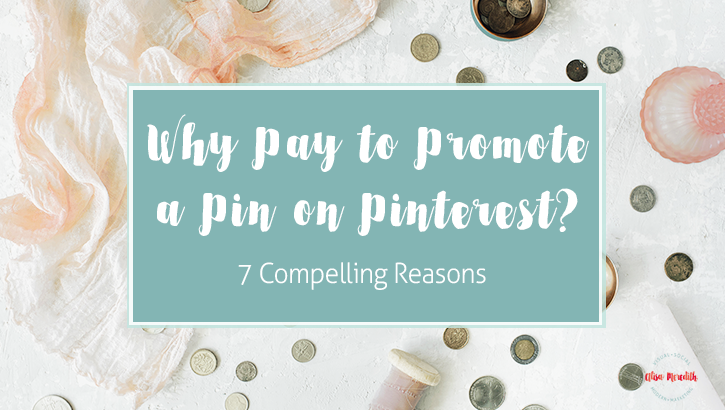 Pinterest drives organic traffic – a lot of organic traffic. In fact, it’s the number two driver of social traffic right behind Facebook. Pinning organically doesn’t cost anything, and it’s fun. And pins you pin today can still send you traffic in a year – so why would you pay to promote a pin?

Ninety-three percent of active Pinners say they use Pinterest to shop and plan purchases. Eighty-seven percent have purchased something they found on Pinterest. Source.

This is something you want to get in on!

Promoted pins have a 2-5% higher engagement rate than their organic cousins. Because of Pinterest’s determination to keep the platform beautiful, Promoted Pins are held to a higher standard. If they look too much like an ad, they are likely to be rejected. Pinterest ads are more helpful resource than annoying interruption.

Unlike a TV ad which you can fast forward, or an ad on Facebook which you probably don’t even see, Promoted Pins are part of the landscape, they become part of people’s profiles and are distributed even more widely when they are repinned (saved).

Although there is always that minority that complains “(insert platform here) ads are killing the platform! I’m leaving!” the numbers show that at least in the case of Pinterest, most of us don’t mind Promoted Pins at all. In fact, an awful lot of us “like” them!

People who engage with your Promoted Pin are 12% more likely to buy from you. Even IN STORE, Promoted Pins work. In fact, a study from Oracle showed that Promoted Pins generated 5X more sales in-store than any other kind of ad.

Promoted Pins enhance brand awareness, too. One internal Pinterest study showed an awareness lift of 40% for those who saw a Promoted Pin.

Check out this success story from sock company Living Royal. They lowered their new customer acquisition cost by 31% using Promoted Pins and found Pinterest conversion rates were 40% higher than other social channels.

4. It’s Harder to Grow a Following

Pinterest can feel a little bit like a vast, beautiful landscape. You love spending time there, but it can get a little lonesome – especially if you’re new. Having a large base of quality followers is so helpful to getting your pins seen and clicked, but what’s a person to do if they’re not quite there yet?

Paying to get your pins seen and clicked is a great way to overcome this disadvantage and increase website traffic. While I wouldn’t recommend Promoted Pins as a means to specifically growing a following, it can help a bit with that, too.

5. The Feed is Getting Crowded

Even if you have a large follower base, a quick look at your home feed reveals that it’s not longer full of pins from people you’ve chosen to follow. Instead, you’ll “Picked for you,” pins chosen for specific board titles, and Promoted Pins. Sure, there are some from people you follow, but they’re now in the minority. And while people can choose to opt out of “picked for you,” as a pinner, you can’t assume they have.

So, with more competition to be seen, it just makes sense to increase your odds with Promoted Pins

6. It Can Take a While for a New Pin to Take Off

If you have a new product which should be trending now (think Easter in March), if you count on it to get traction organically, you could well find that it doesn’t do much for you until NEXT Easter! So, promote that baby and take advantage of the sales now.

7. Promoted Pins Can Be Affordable

If you’ve tried a Promoted Pin campaign, you may have been shocked at the suggested starting bids. $5 per click? I don’t think so! But, depending on your targeting (try an audience) you may be able to find a spot without much competition. Oh, and you can always bid low and see what happens!

Keep in mind that the average Promoted Pin will give you between 20-30% extra activity above and beyond what you’ve paid for. So, if you paid $100 for 100 clicks, when you factor in downstream activity (people saved your pin and someone clicked on that), you’re likely getting more like 125 clicks for that $100 investment.

Are you ready to get started? Download my Promoted Pin Planner now. 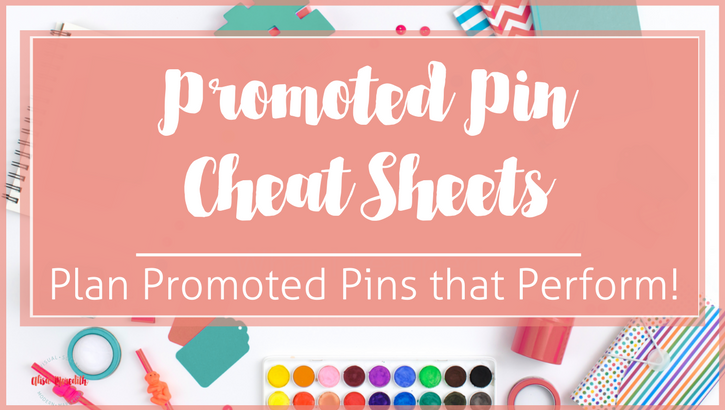